Currently, over 100.000 Tecma macerator toilets and bidets are sailing around the world. This track record and the proven quality of Tecma sanitation doesn’t mean we lean back. In fact, stronger than ever, the team at Thetford Marine introduces the next generation Flexi Line sanitation. Gianluca Silvestri, Business Unit Manager of Thetford Marine states: “I have never been more excited to share such an impressive project to the market, as it will bring distinctiveness to our customer. In addition, it is so much more than a new design for the Silence Plus and Elegance. It also includes clever improvements in the hydraulics and installation with the 2G Improved System. I trust the customer will really appreciate the new Flexi Line.” 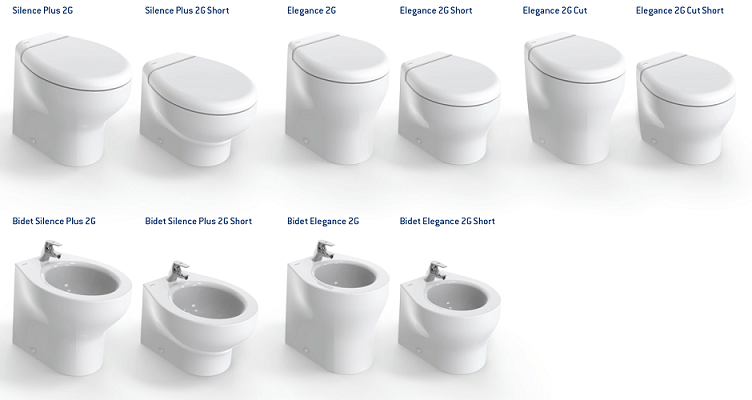 One of the strengths of the current Flexi Line is the flexibility to maintain the same design in every bathroom. With the new Flexi 2G Tecma moves a step ahead with a new design of both toilet and bidet. The Silence Plus 2G is the foundation for the Flexi Line. The new design is created in Italy, by Emanuele Pangrazi, who has recently been awarded with several international awards regarding bathroom and ceramic designs. He succeeded in having the same recognizable design in different sizes and shapes.

The new Flexi Line 2G offers 6 toilets and 4 bidets, with the same design in different sizes, heights, toilet and bidet. A very complementary set of toilets and bidets to match every bathroom on board. The New Flexi Line consists of the big bowl toilet, the Silence Plus 2G toilet (High and Short) and matching Bidet Silence Plus 2G (High and Short). The slightly smaller bowl, the Elegance 2G also offers this full series of High and Short toilet, Bidet in High and Short. And for the less spacious bathroom, where the toilet fits the angle of the hull, the Elegance 2G Cut and Elegance 2G Cut Short offer the same design in a different size.

Never change a winning team is the well-known statement. At Thetford Marine we realize that there are quite some winning aspects in the current Flexi Line and which are key to our customers and their operations. Therefore we didn’t change the basics of the current Tecma Flexi Line. You can be assured of the same macerator technology, same footprint, same outer dimensions, same options for control panels, and the same seat and cover. And on top of that, you get this great new design and the 2G improved system. More details of the new 2G Improved System will be unveiled at a later stage.